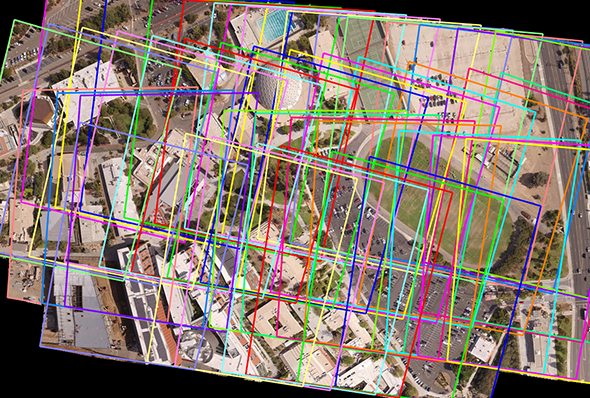 A collection of unmanned aerial vehicle imagery used as input for creation of an orthomosaic. Imagery courtesy of Palomar College.

The process of creating an orthophoto

Generation of orthophotos is a common need when working with satellite and aerial images. The process of creating an orthophoto removes the effects of terrain from an image and presents a result as if the image were taken from nadir. This helps remove obliquity effects that can cause problems when doing feature extraction for objects with height. The inputs required to generate an orthophoto are a terrain model and an image from which the effects are to be removed. Another class of orthophotos are called true othophotos. True orthophotos remove both terrain effects as well as effects from man-made structures such as buildings. In order to correct for building lean, a terrain model, image, and a feature database of 3-D buildings is used as an input. Orthomosaics combine multiple images into a single output mosaic with terrain effects removed.

The SOCET GXP® software solution has the ability to create highly accurate orthophotos, true orthophotos, and orthomosaics. There are a variety of tools included with the software to assist in making these products including automatic seamline generation (several algorithms are provided for automatically detecting the best areas for seamlines), seamline feathering, and image balancing to ensure uniform orthomosaic output. Multiple processors can be used in the generation of these products to increase production time.